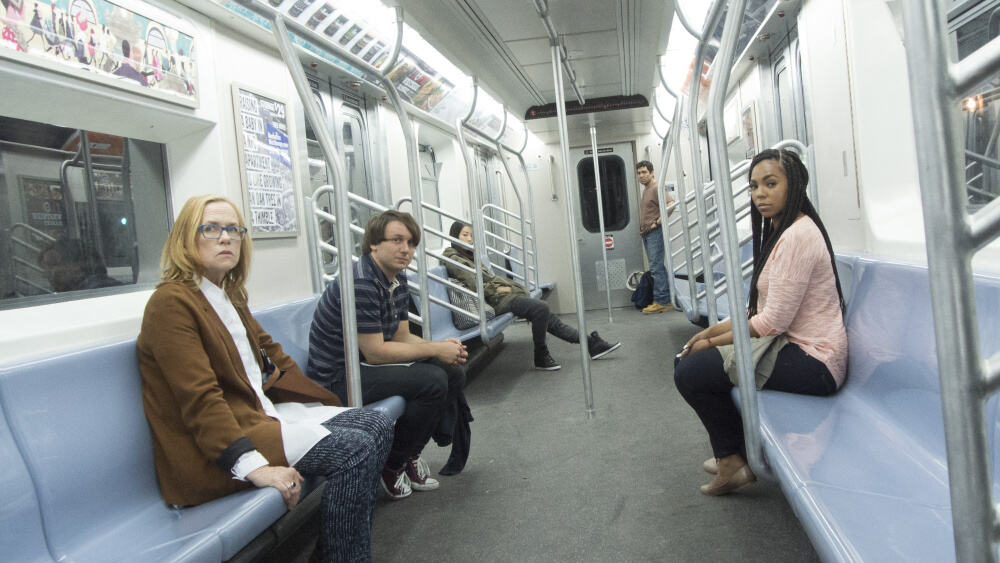 Day to day every person you see has a story you will likely never hear. It is one of the only facts that unites everyone in the world; we each have a past, a present and a future. Hearing those stories and forcing out the expression of an individual’s soul by placing them in an inescapable situation is a concept utilised by many filmmakers. The idea that connections can spark out of nothing is appealing in its absurdity and often its sincere and heartfelt emotional base. Michael Berry’s Stuck is one such film in this vein, but with a twist, it’s a musical.

Stuck sees 6 individuals each from a different walk of life aptly stuck on a train together. When the time comes, each of them expresses their own stories through musical numbers that flesh out and form bonds between each of them. Insight is the core of this film, they all lack it in every conversation they try to start up, but they quickly come to learn and gain new perspective.

Stuck is a flawed film, one that never gets over the boundary it sets itself by isolating the characters on a train. There is a sense of predictability throughout, and Berry never overcomes that. This set up always seems to end the same way when it is in the drama genre, all these characters, most of whom have nothing in common, somehow manage to come out of their situation as friends or acquaintances despite being at each other’s throats moments earlier. Stuck is guilty of this and much more, and yet, as the credits rolled, there was a small sense of emotional satisfaction from what I had just seen.

A lot of what Stuck has to say is unsubstantial, particularly anytime it delves into political discourse. No resolutions come from their arguments because the only problem-solving in this movie comes in song form, and this becomes tedious after it happens repeatedly. The basic rundown of each scenario is that one person will say something needlessly offensive to another person, and not long after, that person will break into a song explaining their circumstances. Most of the songs fail to articulate any form of advanced thinking that justifies having the discussion, it is all very basic takes other films are have discussed in better ways. I can’t say I particularly enjoyed any of the songs either, none of them are bad, but it lacked a truly memorable song which leaves it far and away from the recent critically acclaimed musicals that will replay in your head for days.

However, there is one glimpse of brilliance in Stuck. The character Sue (Amy Madigan) is a mother who has recently lost her son to cancer. When this revelation occurs, it is impossible not to feel incredibly sad for this woman. The editing during the song she sings about losing him is tragically sad. What this film manages to say about loss outshines every other topic they attempted to discuss. This sequence is when Berry fully realises what Stuck is all about, you can never know someone’s circumstances just by looking at them, and sometimes those circumstances had nothing to do with your own decisions. If every other inter-character argument had garnered this level of poignancy Stuck could have been a truly memorable experience. Instead, it leaves us wanting by making its façade all too easy to see through.

The performances are all strong enough to get by. The flow hampers any of them from really getting going though. In reality, these people likely would have sat in silence on their phones while stuck on the train, and it is impossible not to cringe when the characters randomly strike up conversations no one would ever want to have. Giancarlo Esposito is a standout none the less, he certainly generates the most passion and drive for the film, and that is an asset that was desperately needed. Outside of that, there is a lack of chemistry between the performers because everything moves too fast.

Stuck is an admirable attempt to shine new light on ‘don’t judge a book by its cover’ but it misses the mark. There are sparks of intrigue and even insight to be found but on the whole Stuck fails to forge convincing relationships and as such struggles to be convincing in what it is trying to say.