For her opera directing debut, Sofia Coppola has chosen Giuseppe Verdi’s La Traviata – and no more fitting a choice could have been made.

Translated from Italian to English, the title becomes The Fallen Woman, so there’s no wonder that Coppola found an interest in it. Her oeuvre of films (six in total, including the soon to be released The Beguiled) is proof enough of her interest in women who find themselves apart from society, either physically or emotionally. The girls in The Virgin Suicides are locked away by their parents. In Lost in Translation, Charlotte grapples with an isolation she can’t quite put into words. Away from her home, Marie Antoinette is surrounded by riches, servants and companions at Versailles, but still so often feels like it’s her against the world.

In La Traviata, our heroine is Violetta, a courtesan recovering from an illness. What is otherwise a lively opening act – set amidst a party she has thrown to celebrate her newfound health – begins with more sombre imagery. The orchestra’s mysterious opening strains accompany the image of a ghostly white staircase emerging from the darkness, as if it is being formed by a beam of moonlight. As more light enters the stage, three chandeliers loom from the ceiling like spindly ghosts. Violetta descends slowly onto the scene, head down, draped in a heavy black dress.

It is an opera in three acts, with four distinct sets. With a story and music so known and set in stone, Coppola’s contribution – and what people will be watching for with eyes peeled – is in staging, sets and costumes. In that sense, she’s a perfect choice. Each of her films is distinguishable by what her characters wear, whether it’s Scarlett Johansson’s pink underwear that opens Lost in Translation, or Marie Antoinette’s stream of elaborate dresses, once again often making room for pink.

That millennial pink is one of Coppola’s aesthetic trademarks, so it’s notable that it only appears in Violetta’s clothes – which are designed by Valentino – in the final act.

She begins in a serious black, with a lifestyle that is light and playful. But by the end, when her prospects are bleak, she reverts to the innocent pink of girlhood – an association that Coppola has spent her whole career building up. It’s one of her greatest touches to the material: that the end of Violetta’s story should be made all the more tragic by her hopeful dress, which shows her longing to return to a simpler time.

Other than a striking red dress Violetta wears in Act 2, which allows her to boldly stand out against a sea of suited men and calmly dressed women, the costumes Coppola chooses are not made to pop. Given her penchant for beige, that shouldn’t be a surprise; the women’s dresses never go far beyond pastel, and the men are all in black and white. Set against, similarly coloured sets, this creates a picture of a decadent lifestyle in which everything blends into one writhing mass. It is not an exciting vision, but a grand and beautiful one.

The sets – which were designed by Batman production designer Nathan Crowley – are sparse. Each of the four locations are carefully considered and gratefully not overstuffed.

The whole production depends heavily on them, as is evident in the fact that the individual acts are named after the places in which they are set. At the beginning of Act 2, Violetta’s Country House Outside Paris, we are placed inside a massive greenhouse of a building, the entire back wall made of looming panes of glass. It is open and idyllic, fit with two giant trees on either side of the stage and furniture spaced neatly around the space.

It’s less elaborate than Violetta’s previous home, but it is easy to see why this space may be preferable. Coppola evokes the feeling that the end of Act 1 was an escape to this new home. That first set begins as a place of jubilant celebration, but when all the guests are gone and the large staircase seems like the only source of light, it feels more like a dungeon. Violetta sings, and in turn she hears the muffled singing of Alfredo – the man from which she has just received a proposal – from above, as if coming from the heavens. Through song, she wills herself to ascend the stairs, and you will her too – the feeling that she is breaking free from shackles is made tangible by the production’s staging. 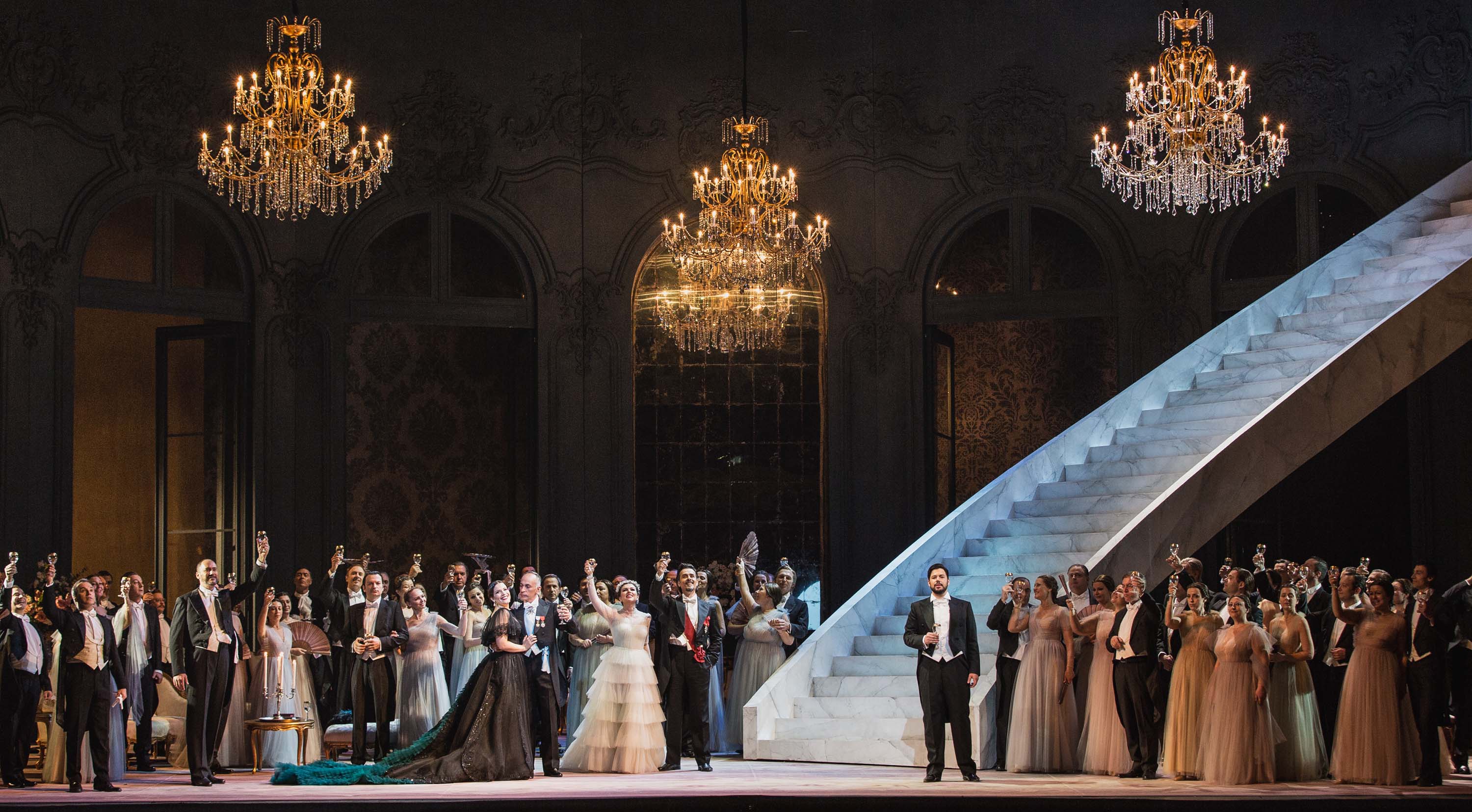 It’s the final act, Violetta’s Bedroom, that is the most evocative.

This time, the window does not fill the back wall. Instead, it is dwarfed by a massive expanse of darkness. The lighting remains dim throughout, and Violetta’s previously commanding presence is infantilised. She clings to what she one had, swaying back and forth across the stage in vain search of something out of reach.

Violetta’s hopeless desperation is beautifully and heartbreakingly captured by a powerful lead performance from Francesca Dotto. She embodies the frailty at the end, but also the exuberant energy that Violetta holds throughout most of the opera. In Act 1, when she is alone in her salon, fretting over whether or not she should go with Alfredo, her interaction with the materials around her is particularly evocative. She drapes herself over chairs and armrests in despair, at one point grabbing onto a piece of black feathery material and running her fingers through it as if holding on for dear life. This purposeful touching gives tangibility to Violetta’s interaction with her surroundings. It gives life to her life within these places.

In what is otherwise a smartly executed production, there is one thing that might disappoint. Being as esteemed of a director within the film industry as she is, Sofia Coppola’s name has drawn crowds to this new production of La Traviata. She delivers it with all the quality you might expect, but none of the daring.

Coming in from a different industry, having made her name with films that aren’t afraid to be bold, some may expect Coppola to have added something unexpected to the opera – something completely out there and unprecedented that might shake up expectations. It’s closest in style and story to her 2006 film Marie Antoinette, a film which was memorably anachronistic and contained a number of playful flourishes. However, it’s clear that experimentation wasn’t what Coppola was going for, and it would be unfair to hold her to a standard that we wouldn’t for any director who has made their name solely in opera. She hasn’t tried to bring filmic influences into opera, but rather embraced the artform in all of its classical appeal. In that respect, it goes off without a hitch.