The BRWC Review: The Beguiled 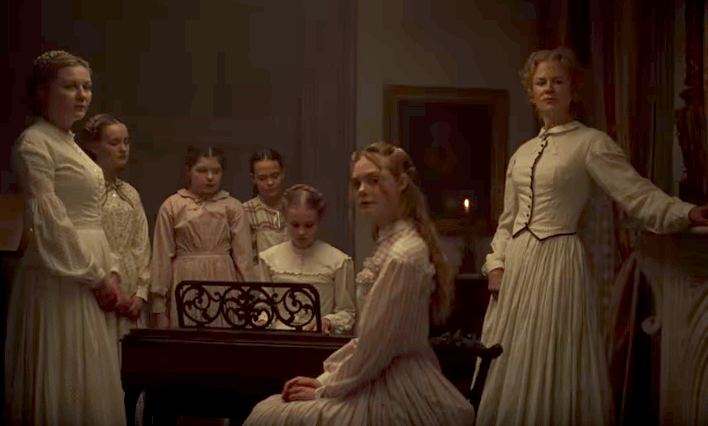 In many ways, The Beguiled is the most ‘Sofia Coppola’ that a Sofia Coppola movie has ever been. Almost everything she’s done has revealed her fascination with women who are grappling with their hopes and desires within a world they feel isolated from ― but none of them have ever stated it so bluntly.

In The Beguiled, the women are a group of teachers and students left behind in a dilapidated girl’s boarding school, trapped in the heat of Civil War era Virginia. Their isolation is literal: the house they live in works at a different rhythm than the turbulent world outside. They learn French pronouns while men die on the battlefield. The war is just far enough away for the girls to go about their daily lives, but not too distant that it isn’t a constant presence in the back of their minds.

The youngest, Amy (Oona Laurence), ventures out to pick mushrooms in the film’s opening sequence. The serenity of nature and her innocent humming are backgrounded by the muffled jolts of gunfire. In other films, exposition comes in the form of heavy-handed monologues. In a Sofia Coppola movie, exposition is a little girl’s indifference to the sounds of death. She doesn’t jump at each bullet. She goes on as if she is deaf to the sounds. There is a title card at the start of the film that announces that the Civil War has been going on for three years, but it’s almost unnecessary. The women’s no nonsense attitudes to its consequences is evidence enough of how fully it has permeated their lives ― and for how long.

Amy’s walk is interrupted by the presence of a man. Corporal John McBurney (Colin Farrell) is the only man in the film with a name and a face, but both of those things are given enough attention to make up for his vast outnumbering.

His name is said in every way: tersely sped over by Miss Martha (Nicole Kidman), the school’s headmistress, or whispered in sultry, feathery tones by Alicia (Elle Fanning), the oldest of the students and the most promiscuous. His face (and body) is photographed with lingering lust, or surveyed in brief, fretful glances by Edwina (Kirsten Dunst), a shy teacher who longs not only to leave for greater things, but ‘to be taken far away from here’ ― with an emphasis on ‘taken’.

All seven of the women are treated as individuals, with each one revealing new sides of the femininity that Coppola is exploring.

This is true even for the smallest of parts: Jane (Angourie Rice) and Emily (Emma Howard) are a duo in many ways ― they often travel through the house together. One plays piano while the other accompanies with singing. However, they are not shown as two halves of the same whole. They may be friends, but class differences are made evident. Jane talks often of her high up family, and her view of Emily is evident when Coppola shows them getting dressed ― Emily ties a bow in Jane’s hair, a job that would have been carried out by the slaves, who we are told have run away from the house.

Corporal McBurney sees the girls as individuals too. In contrast to the original adaptation of Thomas Cullinan’s novel ― the 1971 Don Siegel directed film of the same name ― Clint Eastwood’s interpretation of the character plays into his villainy far more evidently. In Coppola’s version, each character is recognisable. Farrell plays McBurney as your typical ‘charismatic guy’. He assesses each of the women and becomes whoever they need him to be. For Miss Martha, he is respectful and friendly. For Edwina, he works to see inside her soul. He is Amy’s buddy, making sure to share in secrets with her so that she feels special. He bends to Alicia’s desire of him as a sexual object and nothing more. He is an expert manipulator. His job is made all the easier by the fact that these women ― who have spent so long with only the companionship of each other ― are very willing to be manipulated.

While Coppola’s film is more explicitly interested in the dynamic between McBurney and these women, it subtly conveys the women’s relationship with each other.

Coppola deeply understands their sisterhood, and while there are no loud declarations of their dependence on each other, the actresses are able to convey shared history and understanding simply through knowing looks.

Coppola’s interest in white women at the expense of women of colour has been criticised throughout her career, but her literal removal of a slave character and a mixed race character from the source material of The Beguiled has been the cause of a particularly large amount of controversy. Coppola reasoned that she ‘didn’t want to brush over such an important topic in a light way’. Others have criticised this choice as lazy storytelling. It’s true that there would likely have been controversy either way ― the idea of Sofia Coppola attempting to explore race is one that would make many wince. But these complaints are necessary, and in many ways correct. Coppola’s film is commendable for exploring many different types of womanhood, but her comments appear to exclude the experiences of black women from womanhood. It’s hard not to watch The Beguiled and miss the complexities it loses by removing its women of colour.

However, as pointed out by a recent piece by Angelica Jade Bastién at Vulture, the topic of slavery is inextricable from stories about the Civil War, and those that explore the lives of Southern belles. Merely the image of the girls working on the school’s overgrown grounds reminds us that they are hanging on to rapidly disappearing privileged lifestyles. Within the walls of their school, they hang in a sort of purgatory, trapped there for now, waiting to depart into an uncertain future.

Despite the film’s marketing leaning heavily into its genre trappings, you may be surprised by how subdued The Beguiled remains throughout.

There is no big crescendo, and while some blood is shed, the most gore that is ever visible on screen arrives early on, when Miss Martha sews up an injured McBurney’s wounds. Coppola is not interested in exciting us, and there will be some who are left behind by her calm.

This is just as much an interpersonal drama as any of Coppola’s previous features, and just like those films, it is spare and rich in detail. That sparsity is felt more than in films such as The Bling Ring or Lost in Translation, because it is also more compressed than those films, but The Beguiled is never lacking in things to see or people to explore. It is, obviously, a beautiful thing to behold, aesthetically and in all other areas of craft. But its exploration of many forms of desire, and the reality of its mishandling ― all held within a defiantly female gaze ― reveals many layers beyond the surface. The blind eye turned to race is a disappointing and noticeable absence in the film, but its intelligent handling of the material that it does decide to tackle makes it impossible to dismiss. This may not be new ground for Coppola, but it’s just another notch in the belt of one of the world’s greatest filmmakers.