This film follows on directly from the previous film with Katniss waking up to the realisation that District 12 no longer exists and that she is now at the heart of the new rebellions base located in the ruins of District 13.

This is a dystopian communist society run by the survivors turn militant force of  District 13 headed by President Coin. Moore turns in an electrifying performance in this role as a strong female leader not afraid to take tough decisions and makes a worthy opponent to President Snow.

The rebellious themes that run throughout the course of this instalment reminded us of similar themes in Star Wars Episode IV & VI, Equilibrium and also the final instalment of the Matrix Trilogy – Matrix Revolutions. 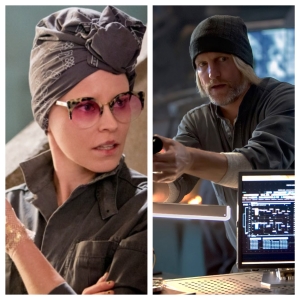 This instalment also sees ‘Capitol favourites’ such as Haymitch Abernathy and Effie Trinket (played by the fantastic Woody Harrelson and Elizabeth Banks) adjusting to life as rebels and living without the splendour of the Capitol – as Effie puts it she feels like ‘a prisoner of war’ and is finding it very difficult without her bizarre array of wigs and make-up.

The film has several gripping action sequences and jaw dropping moments but this is balanced with a lot of reflective scenes and even some lighter comedy moments. Suffice to say this film held our interest throughout. Having watched the three installments in a triple bill showing (at Cineworld Newport) we can safely say that this franchise remains consistent throughout – and this film easily lives up to the previous two.

Philip Seymour Hoffman sadly died on the 2nd February 2014 at the age of 46 due to a personal struggle with addiction.

At the time of his death, Hoffman was filming Mockingjay – Part 2 and had completed the majority of his scenes. This film pays a fitting tribute to him during the ending credits as appreciated by the audience (and resulted in a round of applause). His performance is among the strongest of his career.