The Ghost Who Walks: Review 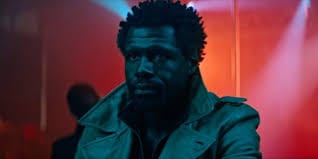 Exploring the old adage that there is no honour among thieves, Cody Stokes’ debut feature is a rollicking blaze through a number of existing properties, but unfortunately lacks its own identity.

Concerned with a recently released criminal, Nolan (Garland Scott), his facially disfigured sidekick, Stitches (a revelatory Frank Mosley, who in part reminded me of Dan Aykroyd in ‘Trading Places’, but mainly because he spends the entirety of the film in a Santa outfit with blood on his face), and Nolan’s almost-gone-straight former squeeze, Lena (Alexia Rasmussen), ‘The Ghost Who Walks’ follows the spectral ex-con as he scrambles to meet face-to-face the daughter he has never met, before his former boss Donnie (Gil Darnell) can catch and kill him as retribution for ratting him out five years previously.

Alas, ‘The Ghost Who Walks’ treads very little ground that many films of a similar ilk have already worn ad infinitum. For most of its tiresome 106 minute running time the faint Gotham-esque neon of St. Louis, Missouri brought to mind the vastly superior ‘John Wick’ series, which is quite evidently the primary influence on the narrative.

Tropes aplenty litter the script, which ordinarily isn’t a problem with this genre, but as caricature-like as they are, and as signposted the narrative cues present themselves, you can be forgiven for losing interest in the story.

That said, there were strong elements. As previously stated, Frank Mosley’s performance is at once entertaining and affecting, particularly in a later scene.

The violence, ugly as it is, has a realism that Hollywood is normally wont to glamorise, which elevates the film to something rather more than the stinker it might’ve been. Also, the poster design which accompanies the film’s release is quite wonderful; moody, colourful, surreal, and actually quite special.

It’s just a shame that the finished article has troubles living up to its marketing. The film shows promise, but is largely a disappointment.