One Cut Of The Dead: The BRWC Review 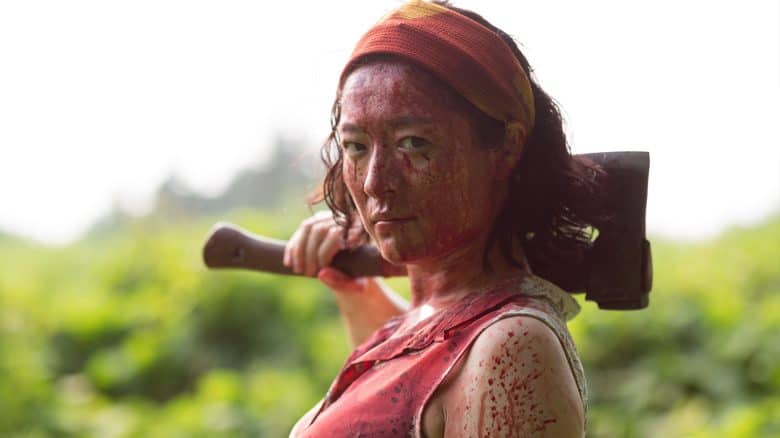 It is a strange feeling to be utterly thrown by a film. Some films, admittedly, might set out to wrong foot their viewers – films that have since become famous for their twists. Many of these films will lead you in one direction only to throw you off near the end, or hint at the answer only to reveal the clever drip feed of clues near the end. One Cut of the Dead is something entirely different, purposefully leaving gaps and awkward moments that are wholly explained later in the film. The film’s twist is to make it seem like these moments are mistakes – not deliberate at all, merely a result of the poor production common to lower budget films. Clearly something more intriguing lies beneath this assumption.

The picture opens on a film set – a warehouse where a small crew are creating a zombie film. After the 42nd take of the same shot, the director loses his temper at his actors, storming off to find a better way to force them to emote. His solution: to perform a blood ritual to raise the undead on grounds that just so happen to be haunted. Blood splatters over the actors as they navigate the zombies roaming the area, and the running and screaming is choreographed with enough imagination so as not to become repetitive. The single take in which this is shot (the titular “one cut”) is more than a novelty; somewhere between the smooth deliberation of films like Birdman and Victoria, and the shaky handheld havoc of Cloverfield. “This is fun-fucking-tastic!” the director promises in translated subtitles. And it is.

But something is always slightly off. Characters act or exit without clear reason; what little dialogue there is jumps around non-cohesively. Small issues that slow down the pace or distract from the point, but are painfully noticeable. Thankfully, just when you begin to worry where this one take can go for another whole hour, everything changes. It is a month earlier and the director is preparing for this shoot. This middle act builds well, as the director deals with production difficulties: stubborn actors, a drunken DOP, and a sound engineer with tummy trouble, to name just a few. It’s all a little tame, until the day of the shoot arrives.

It is at this point that all of the film’s setbacks compound into a set of obstacles that the cast, crew and director must overcome during the single take shoot. Every seeming mistake from earlier in the film is explained away with comedic joy, only added to by the reversal of those grimaces that we failed to hide for the first half hour. Writer/director Shin’ichiro Ueda has masterminded a farce matching the highs of Neil Simon or Peter Shaffer’s best work, manipulating 20th century theatrical techniques into the mould of a modern genre.

This film isn’t a success because of its deliberate mislead, but an intelligent comedy of errors that works so well because of the set ups – the ability to play on an audience’s expectations. One Cut of the Dead is a testament to the pleasure derived from ignoring any preconceptions; of going into a film without a thought of what might occur. And if you do go into this film expecting one thing, be prepared for your mind to be changed by the end.

Dan will watch just about any film he can get his hands on. His ultimate goal is to see all of the films, but for now he's happy obsessing over anything with a brilliant script and/or well executed violence.